Aberdein Considine invests in the football stars of tomorrow 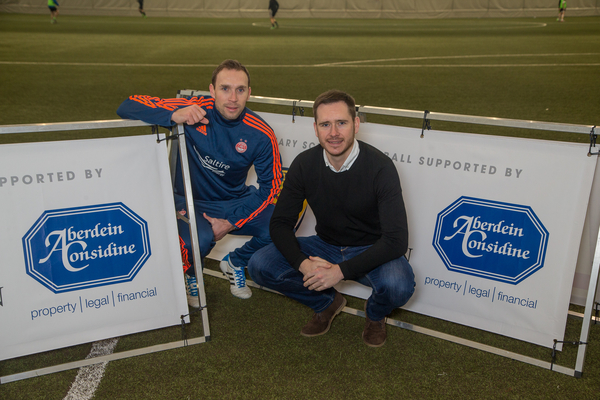 School football in Aberdeen and Aberdeenshire has received a major financial boost thanks to Aberdein Considine.

The national law firm has teamed up with the AFC Community Trust to become the headline sponsor of Primary Schools Football in 2016.

Together with Aberdeen City Council, the Trust supports the schools league across Aberdeen.

More than 700 local children take will part in the weekly sessions, which kick-off this month.

Aberdeen is the only Scottish city where primary school football is delivered alongside the local professional football club.

The pioneering model helped The Dons win the SFA’s 'Best Professional Club in the Community' award last year and the model is now being watched closely by other areas.

Ritchie Whyte, pictured, a Corporate and Commercial Partner at Aberdein Considine, said the firm was happy to be backing the league.

He said: "We are delighted to be working in partnership with the AFC Community Trust to develop primary schools football even further in Aberdeen.

“The Trust and the local council aim to increase football participation even further - something we wholeheartedly support.”

Developing the football stars of tomorrow

The league follows the Scottish FA's National Player Pathway, which promotes the small-sided game, where young players will get plenty of touches of the ball, opportunities to score a goal, chances to make a successful pass, and find themselves in plenty of 1v1 situations.

“Primary school football in Aberdeen plays a huge part in creating the stars of the future,” he said.

“It plays a key role in the development of youngsters, both in terms of football and a general healthy lifestyle.

“To have such a prestigious organisation as Aberdein Considine working in partnership with AFC Community Trust to ensure it continues to flourish going forward is excellent news.”

For more information about the AFC Community Trust, click here.