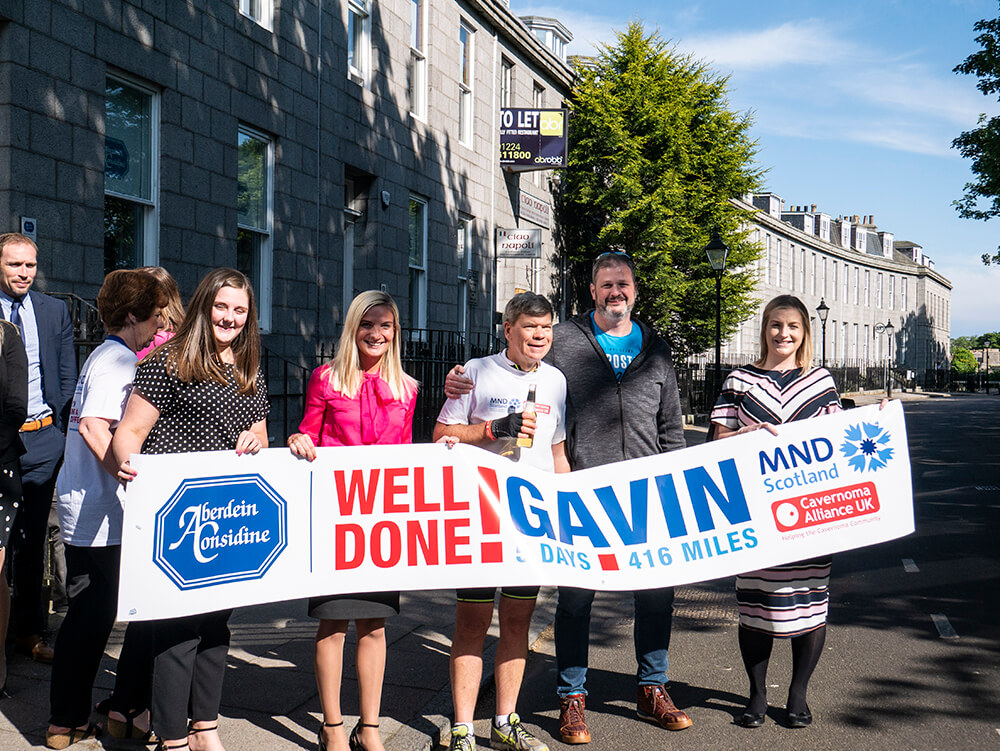 Gavin, who is based Glasgow, visited all of the firm’s 20 offices across Scotland and England. Gavin took on this challenge as a personal challenge for his 60thbirthday but also to raise funds for two separate charities.

All the funds raised will go towards Aberdein Considine’s chosen charity MND Scotland and Cavernoma Alliance UK, that charity associated with the condition which affects Gavin’s daughter Ailsa who suffered a bleed on the brain a couple of years ago. Ailsa was forced to give up work and live back at home, supported by Gavin and his wife.

The ride began at the firm’s Newcastle office on 4th June before taking in the Edinburgh offices. Gavin visited all of the offices in Glasgow including those in Newton Mearns and Byres Road where he is the partner in charge. The journey then moved to Stirling and Perth before travelling north to Aberdeen and Aberdeenshire, before finishing on 8th June.

Gavin was supported with an Aberdein Considine vehicle, with volunteers taking turns to drive during each leg.

In total, Gavin cycled around 420 miles. With around 480 staff in the firm, staff also supported Gavin by cycling a leg in their local area.

Gavin said: “This has been the biggest physical challenge I’ve ever faced but it’s been an incredible experience.

The support I’ve had from colleagues and clients has been extremely humbling, and whilst the muscles and mind are tired, it’s hugely rewarding knowing that two fantastic charities will benefit.”

Donations are still open at the following link if you wish to donate to this great cause.