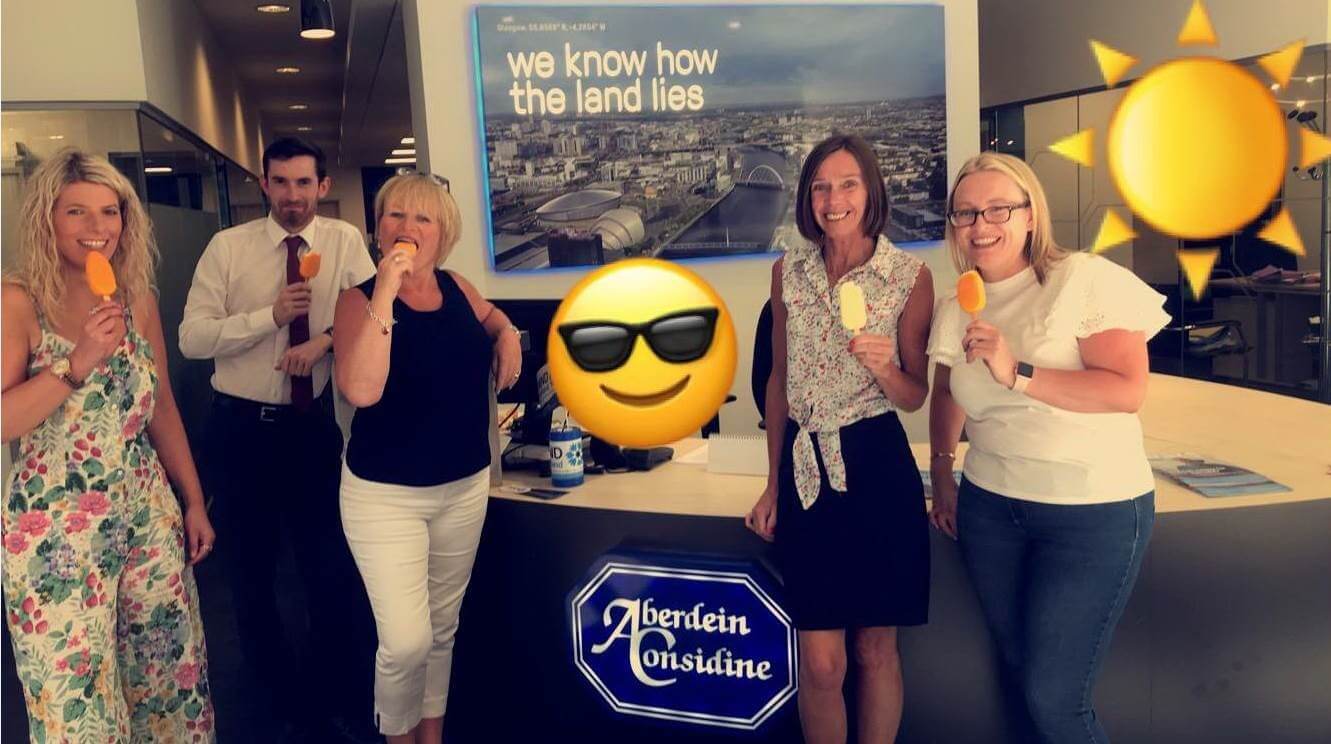 Welcome to the latest lender services bulletin for summer 2018

i) Validity of Bulk Assignation of All Sums Due Securities – Scotland

The General Data Protection Regulation (GDPR) is probably the most recognised Regulation ever made by the European Union.

We too have given this a great deal of consideration with our Lender Services Practice Group implementation plan which has been managed by Alison Forbes, our compliance manager. In total we had 28 actions as part of the implementation commencing with a thorough review of the Regulation, external agents fact finding consultancy, reviews of multiple policies, extensive staff training, personal data audit and cleanse and review of third party suppliers own policies.

Although there are still some policies and procedures to be reviewed in light of GDPR, Alison Forbes advises that “we’re in a good place” with our implementation.

Going forward, our main concerns include third party oversight procedures and ensuring our letter suites are fully compliant and reference the firm’s privacy policy where relevant.

The FCA’s Business plan for 2018/2019 aims to reflect the variety of changes affecting both financial services and the wider society. In particular addressing firms being challenged by user needs, as well uncertainty in the economic and political position, particularly Brexit.

The seven priority areas where intervention is thought to have the greatest impact are:

Retail lending will be very much in focus. A report on how providers are meeting their customers’ needs will be produced in 2019.

Work will primarily concentrate on higher credit-risk consumers, how lenders assess affordability and whether current procedures are adequate. Interest-only mortgages will also be explored and the debt management sector will be reviewed to ensure that it is “fit for purpose”. The FCA’s aim is to ensure consumers are adequately protected while not placing disproportionate burdens on firms.

The Consumer Credit Act 1974 will be reviewed with a report to the Treasury by 1 April 2019. This review will consider the current provisions in relation to proportionate consumer protection and whether any amendment of the legislation or replacement with FCA rules or guidance would be welcomed. An interim report will be open to responses prior to the final report. We intend to respond representing the legal lender services sector.

Finally, the ‘Future Approach to Consumers’ initiative investigates how different consumers can become vulnerable at different times in their lives and the requirement for firms to be able to adapt to these changing circumstances. The FCA wants to better understand the market and consumers’ journeys, and use this as an opportunity for industry, regulators and consumer groups to work together to produce meaningful change for vulnerable consumers.

A new set of reviews will include:

The FCA wants to ensure remuneration policies and practices are encouraging sound and effective risk management. The aim is to monitor the debt management sector to ensure customers are treated fairly and that the processes adopted are fit for purpose.

There has been a dramatic increase in the number of mortgages with long-term arrears. The figure rose to more than 61,500 in 2016 compared to that of 49,000 in 2008. The FCA plan to assess firms’ use of forbearance and ability to deliver fair customer outcomes, taking further action where necessary. The thematic review on long-term mortgage arrears will be completed by March 2019, whist an interim report will be available this summer. We will closely follow the review and we will report on further developments.

Court Fees that parties are required to pay to raise or defend a court actions in Scotland, are set out in Fee Orders and updated annually, with the view to full cost recovery for the civil justice system.

The Scottish Government found that “maintaining access to justice must be a paramount consideration”. As such, a modest increase to court fees of 2.3% was proposed to reflect inflationary pressures.

Increased fees have since been in place since 25 April 2018.

Sheriff Officer Fees have seen a similar modest increased as at 4 June 2018.

Users will now be directed to the Money Advice Service where copies of the most up-to-date standard Financial Statement can be obtained. This is to assist those seeking debt advice and their advisers. The single format will enable greater cooperation between the debt advice sector and creditors helping achieve the right outcomes for customers.

The Claimant must now indicate in the Letter of Claim whether they wish to refer the dispute to adjudication. If so, three adjudicators or a nomination from a nominating body must be sought; alternatively they should state their reasons for not wishing to use adjudication.

On 14 June 2018, the Stage 1 Report on the Prescription (Scotland) Bill was published.

Prescription (statute bar) is the law relating to the extinction of civil rights and obligations by the passage of time. The Bill proposes a number of significant changes which will have significant implications for lenders and their claims, particularly professional negligence claims.

The Supreme Court decisions of David T Morrison & Co Ltd v ICL Plastics Ltd [2014] and Gordon and others v Campbell Riddell Breeze Paterson LLP [2017] turned conventional practice on its head by finding that knowledge of a breach was not required to start the prescriptive clock, but instead, for example, incurring legal fees for enforcement of notices would start the clock.

Typically a lender will consider pursuit of a professional negligence claim in respect of residential lending only after the property has been repossessed and sold resulting in a crystallised shortfall loss. However, loss may occur and be discoverable prior to a final crystallised loss, such as where the borrowers covenant is no longer of value, or where legal fees have been incurred and the field agents report suggests negative equity. Currently, it is possible that a claim may prescribe prior to the property being taken into possession.

A new approach to the ‘discoverability test’ is proposed to the five year prescription period relating to an obligation to pay damages. The proposed test consisting of the elements that a creditor must be aware (or could reasonably have been expected to become aware) is:

Currently the statutory periods of prescription cannot be modified by agreement. The new legislation would allow standstill agreements where a dispute has arisen and it is the first such agreement for the maximum period of one year.

This may remove the requirement to raise protective court proceedings in some cases, providing greater scope for pre litigation settlements.

New Tenancy Law and Impact so far on Repossessions – Scotland –

The Private Housing (Tenancies) (Scotland) Act 2016, introduced a new form of tenancy, the Private Residential Tenancy (PRT). Whilst old form, Statutory Assured Tenancies (SATs) continue to be in existence, no new SATs can be agreed. As part of the new tenancy legislation and court reforms, eviction proceedings relating to rental properties must be raised with the First-Tier Tribunal for Scotland (Housing and Property Chamber).

Part 5 of the Act deals with termination of a PRT. A notice to leave must be sent by a lender, with a notice period of 28 days (where the entitlement to occupy the let property has been less than 6 months) or in all other cases 84 days.

Where the tenant fails to remove following the notice period, an action can be raised in the Tribunal for eviction under Ground 2 being:

Ultimately, the new PRT framework, poses some challenges for lenders – the period of notice is longer and the courts no longer have jurisdiction to order eviction of tenants. Our experience with the Tribunal to date is that it is much slower than the courts, without the ability to expedite the process. Following expiry of the notice, an enforceable order is likely to be a further 10-16 weeks.

Validity of Bulk Assignation of All Sums Due Securities – Scotland

The decision of One Savings Bank v Burns in Banff Sheriff Court in May 2017 found that assignation of Standard Securities in Scotland that did not state the sums outstanding as at the date of assignation were invalid. The case of Shear v Clipper Holdings, a Court of Session case, quickly followed One Savings finding that such assignation were not invalid.

Promontoria follows Shear, which is welcome news, confirming as far as current precedent supports, that it is competent for an all sums due security to be assigned without reference to the sum due under the security at the time of the assignation or otherwise.

View Briefing on Validity of Bulk Assignation on all sums due securities in Scotland.

Under Scotland’s new Simple Procedure system (for claims under £5000) a Sheriff dismissed a series of claims raised by Carbot Financial when he made an ‘unless’ order requiring sight of specified documents within 28 days, despite no defence to the claim being lodged or the Defender having admitted the claim and requested time to pay.

The Sheriff Appeal Court found that the Sheriff had acted in error by exceeding his jurisdiction and issuing an ‘unless’ order requiring sight of the documents. While the Sheriff generally has to an extent a public principle role to ensure that claims are within their jurisdiction and competent, consideration as to specification and relevancy is outwith the Sheriff’s remit in an undefended matter.

In the recent Court of Session decision (the highest first instance civil court in Scotland), Lord Bannatyne delivered his judgment which reversed the previous case of S&M Livestock Limited (in liquidation). When a liquidator is appointed by a court and they submit their account of expenses, a court reporter is also appointed to review and approve the accounts of the liquidator.

Previously, the scope of the court reporter was thought only to be review the time entries of a liquidator’s accounts in order to determine that the work that was undertaken was recorded reasonably. However, the case of Equal Exchange Trading Limited acknowledges that in fact the court reporter has a wider remit and that a court reporter is entitled to report any concerns that they have regarding the course of action taken by a liquidator to the court in order to let the court take a view on whether or not to fix remuneration for the liquidator.

This decision will be unwelcome to liquidators, who will be required to be aware that their choices regarding which action to take will be open to scrutiny by a court reporter which may see a reduction in the liquidators’ fees being fixed by the court.

A disabled borrower in arrears requested that their loan be switched to interest-only following the issue of possession proceedings. The lender’s policy was to decline conversion of existing repayment mortgages to interest-only products.

The defence argued that the lender’s blanket policy was a breach of the disability discrimination legislation.

The relevant legislation imposes a duty on service providers to take reasonable steps to change their practices, policies or procedures where these make it impossible or unreasonably difficult for disabled persons to make use of the service compared to other members of the public. A failure to make reasonable adjustments may amount to unlawful discrimination. A service provider is not required to take any steps which would fundamentally alter the nature of the service in question.

This outcome will no doubt come as a relief to lenders. However, it should be noted that the County Court Judge was highly critical of the lender’s conduct, in particular whether it gave due consideration to the borrower’s position as a disabled person. The disability discrimination legislation has been replaced by the Equality Act 2010, which contains similar provisions.

Lenders may wish to revisit their policies on conversion of mortgages to ensure compliance with the Equality Act 2010. Please do not hesitate to get in touch if you would like further advice in relation to this.