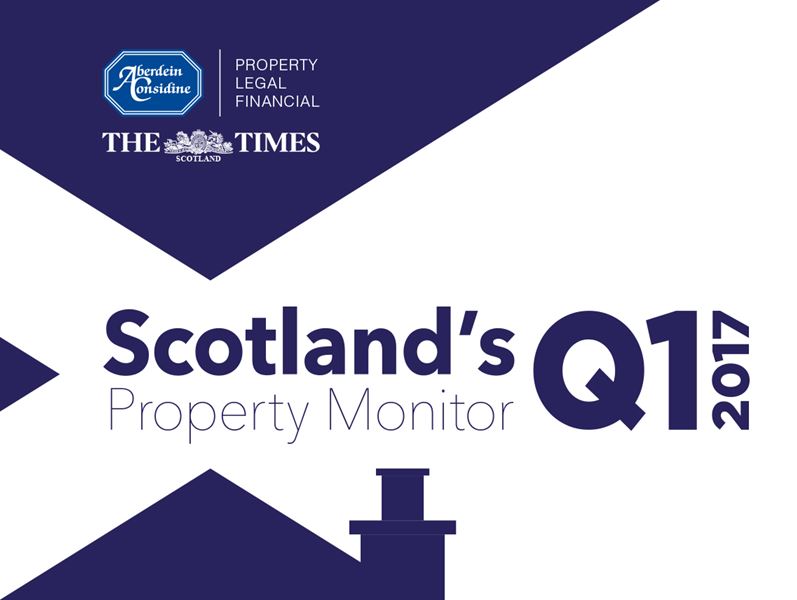 Scotland’s homeowners are becoming increasingly anxious about the impact Brexit will have on the value of their property, according to a new report launched today by Aberdein Considine in association with The Times newspaper.

The report blends Registers of Scotland and Council of Mortgage Lenders data and analysis with specially-commissioned market research and interviews to find out what the country’s homeowners are really thinking at this time of unprecedented political uncertainty.

Here's a summary of the main findings. You can read the full report by clicking here.

The report reveals a bright picture for homeowners in Glasgow, which is enjoying a prolonged period of property price growth following its belated recovery from the 2007/08 financial crisis.

Elsewhere, sales in all seven of the local authority areas which make up West Scotland increased during the first quarter of the year.

East Dunbartonshire - home to two of Scotland’s most affluent suburbs, Milngavie and Bearsden – has the third best performing market, just behind East Renfrewshire and Edinburgh.

Together, these increases have helped raise the overall value of the area’s property market by a staggering 23.3% - and this is expected to keep growing.

Rising property prices only tell half the story in the Edinburgh market, which appears to be malfunctioning.

However, prices are undoubtedly being inflated by a lack of properties coming on the market for sale.

This is best reflected in the near 12% drop in transactions in the city, which also dragged the overall value of the market down by around 5%.

Therefore, we are continuing to experience a seller’s market, driving up prices amid unrelenting buyer demand.

Oil and the North-East market

Almost £3.5million worth of property is being sold every day in Aberdeen and Aberdeenshire as the North-East market shows the first signs of recovering from the oil crisis.

After almost three years of decline, home sales across the city and shire are still down, 12% and 10.6% respectively.

However, the rate of decline has slowed dramatically and the spring market was noticeably busier than in previous years. We are seeing quick sales and, perhaps more importantly, competition for properties, which has even led to some closing dates being set in recent weeks.

An unprecedented period of low mortgage rates has led to a resurgence in remortgage activity in Scotland.

The new figures also showed Scots borrowed a total of £1.8billion in the January-March period for house purchases - up 5% on January-March 2016.

However, our Property Monitor research found some concerning trends amid the mass lending.

Four out of five people surveyed (81%) said they would be adversely affected by just £100 being added to their monthly mortgage repayment. Of those, 29% said they would struggle to make ends meet.

That sum represents an interest rate rise of around 1%, which still feels unlikely at the moment, but who knows where the current political tide will take the UK economy over the next few years.

And of the people we surveyed who had a mortgage, it would appear that over half (58%) are paying too much. Average rates, depending on loan to value, are currently sitting between 1.75% and 2%.

So those paying 3% or more may be able to save money.

Respondents to our Property Monitor research generally regarded the political and economic environment in Scotland as having a negative impact on the value of their property.

The prospect of a second referendum on Scottish independence incited the strongest negative response, with 58% saying they feared it would decrease the value of their home.

More than half (51%) said they thought Brexit would negatively impact property values. So on the face of things, people are marginally more concerned about Scotland staying in the UK than the UK leaving Europe.