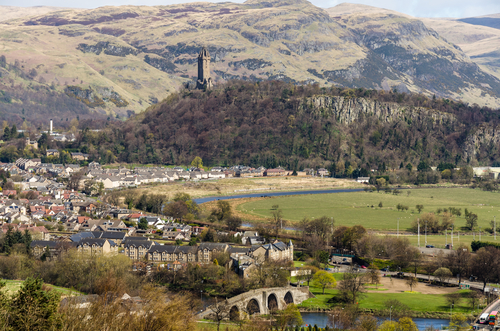 Stirling has been named as the most affordable place to buy a home in the UK.

The past year has seen a deterioration in affordability in UK cities, driven by rising house prices across the country, according to the Lloyds Bank Affordable Cities Review.

However, Glasgow and Stirling remain in the top 15 'most affordable list', with the latter being named the most affordable city to live in for the second consecutive year.

Stirling remains the UK’s most affordable city despite a deterioration in affordability over the past year.

The average property price in the city of £158,645 is 3.9 times gross average annual earnings.

Affordability in UK cities is, on average, now at the same level as in 2009 but is 15% lower than the peak of 7.2 times earnings in 2008 at the height of the last housing market boom.

The overall improvement in affordability across UK cities as a whole over the past seven years has been caused by a combination of an average house price decline of £12,630 (-6%), and an increase in the gross average annual earnings in UK cities of £3,058 (+11%).

The UK’s most successful cities economically such as London and Aberdeen have seen the strongest property price rises.

London, which has recorded the highest house price growth with a 40% rise during the past five years, was the seventh least affordable city in Lloyds’ report, with the average home priced at £387,336, 8.75 times the annual gross local pay.

Meanwhile, Aberdeen, the country’s oil and gas capital, has recorded the highest house price growth since 2005, with the value of a typical home soaring by 88% to £219,177.

The fall in oil prices continues to change the north-east property market - but recent Scottish Government figures show that the impact may not be as severe as feared.

Aberdein Considine offers a full property and mortgage service to buyers and sellers across Scotland, including the cities of Aberdeen, Edinburgh, Glasgow, Perth and Stirling.